The joint research project KaWaTech is a German-Vietnamese cooperation for the development of sustainable technologies for karst water management. More than 25% of the world population relies on freshwater from karst aquifers. In the Dong Van Karst Plateau in the Northern part of Vietnam, the tropical climate conditions with its distinct dry seasons lead to serious water supply shortages. Since September 2010, the project region is an UNESCO Geopark, so tourism will become more important in the near future and therefore water quantity problems will further increase. Innovative technologies and concepts are developed for a sustainable use of karst water. These technologies include the exploration and use of underground karst water resources, water pumping with renewable energy and the usage of hydroelectric power as renewable energy resource as well as water distribution concepts and the protection of the water resources.

Tracer tests give valuable spatial and temporal information about the hydraulic properties of the karst aquifer and are essential for the delineation of catchment areas. At several springs that are used for freshwater supply, the variability of the hydrochemical and microbiological parameters is investigated in detail. During heavy rain falls, an enhanced input of pathogenic microorganisms and suspended particles is observed, which influences the groundwater quality and restricts the usage. In long dry periods on the other hand, the quantity of the available freshwater resources is limited, and potential contaminants are less diluted. Prime objectives of the geological and hydrogeological investigations in the Dong Van area are the understanding of properties of the karst aquifer and its protection to save groundwater as a future water resource. 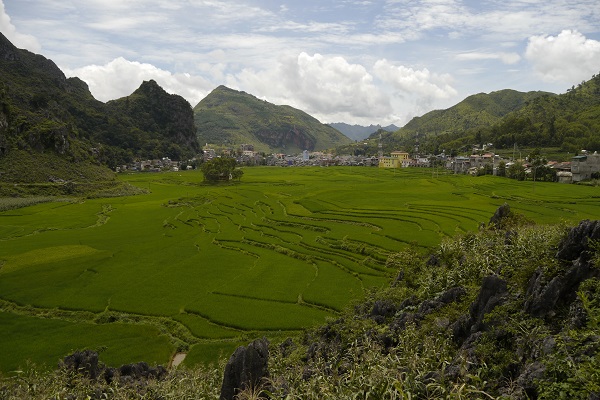